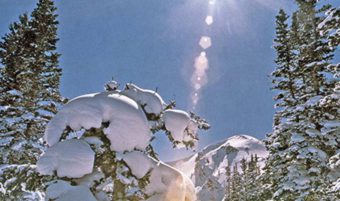 When you think of electricity being generated from hydroelectric dams, you might first picture rushing rivers that spin giant turbines. But the story actually begins on snowcapped mountains.

Hydropower is the conversion of flowing water into electricity. Hydropower is a renewable energy source, meaning its fuel is replenished by nature, or more specifically in this case, by the water cycle. The water that drives the Northwest’s hydroelectric generators comes from rain and snow that falls within the Columbia River Basin—a vast area that begins in the Rocky Mountains of British Columbia and flows down through most of Washington, Oregon, Idaho and western Montana.

Rain helps keep the rivers flowing in the winter and spring, but it’s the melting snow that carries us through the dry summer months. Snow that accumulates high in the mountains—the snowpack—is vital to the energy needs of the Northwest and from year to year.

Where you see snow, we see fuel.

Knowing how much water the snowpack holds in any given year is critical to ensuring enough fuel is available to meet the region’s demands. This information helps hydropower operators plan for near-and long-term energy availability for the Northwest.

Following dry winters with little snowpack, it may be difficult to refill the reservoirs, and there may not always be enough water to meet all demands on the system. The region’s hydropower operators work together to make the best use of storage reservoirs and maximize the power output to maintain power reliability across the Northwest.