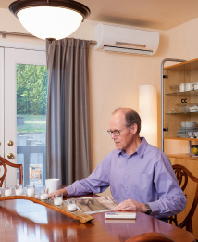 Replacing their forced-air furnace was a big financial decision for Steve and Vicki Cully of Lakebay. Large, west-facing windows meant their house was hot in the summer and expensive to heat in the winter. After researching available options they decided on a ductless heating and cooling system, which in their case cost thousands less than a heat pump and qualified for $1,000 PenLight rebate.

A ductless heat pump typically consists of a wall-mounted indoor unit combined with an outside compressor about the size of a large suitcase. Ductless units require only a very small hole drilled into the wall, making them less vulnerable to air leakage and security problems. In addition, they’re quieter and less visible.

They are also exceedingly energy-efficient. In the average house with an electric furnace, you’re losing 25 percent or more of your energy to ductwork. By eliminating the ducts, you end up with a more efficient system. Ductless heat pumps have inverter-driven fans and compressors, which speed up and slow down based on the heating needs of the home, instead of shutting off entirely like traditional heating systems. This means they last longer and cost less to operate.

Steve and Vicki, long-time members of PenLight, are thrilled with their decision to go ductless. Their monthly heating costs are 50 percent less than they had been with their old forced air furnace. “Our new ductless system is a tremendous improvement over our previous electric heat. The system provides consistent, balanced and continual heat, and we get AC in the summer.”