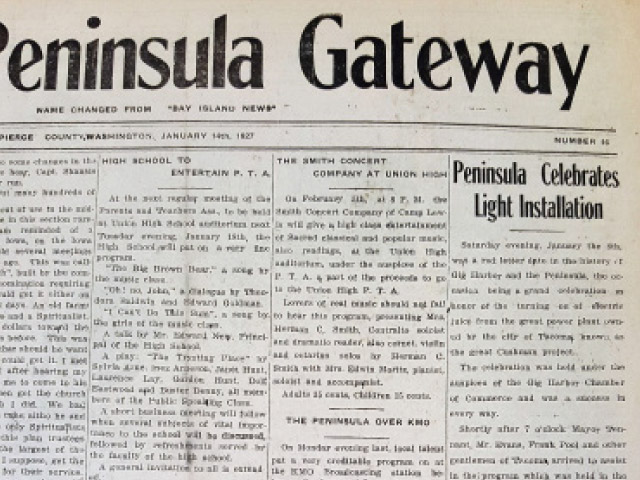 It was described as a “red letter date in the history of Gig Harbor and the Peninsula!” A grand celebration was held in honor of turning on “the electric juice,” as it was called back then. In less than a century it’s become commonplace to live with electricity. However, in the early years, it meant such essentials as providing heat for poultry farming facilities on the Key Peninsula and ensuring local residents could install appliances and lighting at home. When “the juice” was first turned on, who could have imagined its uses today? There are so many innovations for which electricity powers access, from the microwave and the internet to charging the batteries for cellphones and electric vehicles.

If you were standing outside the old Empress Theater on January 8, 1927, you would have marveled at the colored lights that lined the streets. It faced Harborview Drive in downtown Gig Harbor, where McBeckland’s women’s clothing store stands today. The Olympic Concert band played and several community leaders spoke in honor of the occasion, including a representative of the State Chamber of Commerce.

So much has changed since that time. We participate in conservation plans and even generate some of our own power through investment in the Harvest Wind project, a 99-megawatt wind farm near Goldendale that started in 2009. We also work closely with state officials to ensure PenLight meets special renewable-energy mandates that are part of the Energy Independence Act (I-937).

With an eye toward the future, we feel that we have lived up to the vision of our founders, to continually improve the quality of life for our members. We know we will continue to reflect our values of integrity, innovation, respect and dedication that have been with us since the beginning.