Hydropower has existed for a long time. Before hydroelectric dams, people harnessed the energy from flowing water to turn water wheels and power basic machinery. With the introduction of electricity, people applied this same concept to spinning turbines to generate energy, and the hydroelectric dam was born.

How does a hydroelectric dam work? 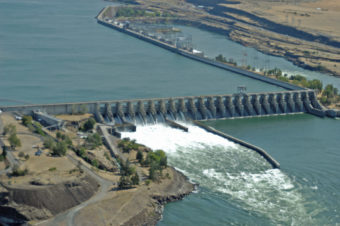 Dams create reservoirs or pools of water. To generate electricity, reservoir water is released through tunnels or pipes and aimed at turbine blades. The force of the water turns the turbines like a revolving door. The turbine is lined with copper wire, so when it rotates inside large stationary magnets, electricity is generated. The water exits through another pipe and returns to the river.

However, not all water from the river flows through the dam itself. Some water can be allowed to bypass the dam. This process is called spill. Spill can be used when additional water needs to be released or when it is necessary to bypass turbines. There are many factors besides energy demand that determine how much water is stored or spilled. These factors include water level, water temperature, and the rate of flow. For example, spill is sometimes used to help salmon avoid contact with turbines.

What are the advantages of using hydroelectric dams?

Perhaps the greatest advantage of hydroelectricity is its simplicity. It relies only on gravity and the flow of water to generate energy. The result of using rivers as a source of fuel is that no pollution is created as a byproduct, making hydropower a clean energy source. Additionally, the efficiency of this form of generation means it has the capacity to deliver massive amounts of power when installed on larger rivers. Unlike most other forms of energy generation, the fuel for hydropower can be used repeatedly as it passes from one dam to the next. This aids in the renewability of hydro while driving down its costs.

Another advantage of hydroelectric dams is their ability to store energy to be used later. By controlling the flow of water, they can store or release water to generate more or less electricity, depending on demand. In essence, they operate like a battery. This reliability is important to keep the electrical grid stable. It also pairs well with other renewables that are intermittent fuel sources.

Beyond generating and storing energy, hydroelectric dams provide an opportunity for greater control over rivers for both commercial and recreational activity. Hydroelectricity helps make waters more navigable for ships and barges that transport valuable goods around the world. Behind the dams, reservoirs are used for boating, fishing, swimming, and more. This helps create thriving communities near hydroelectric dams. Dams also offer many communities safety against dangerous floods.

What are the disadvantages of hydroelectric dams?

No energy source is perfect. Hydroelectric dams do have their drawbacks. One of the unavoidable consequences of using hydroelectricity is it affects the natural flow of a river. This can be an advantage for humans, but a disadvantage for the ecosystem. The slower flow of the river can allow for invasive species to take up residence and can alter the riverbed itself. Dams without fish passage are especially problematic for migratory fish.

It is important to point out that many of the lower and mid-Columbia dams, as well as the lower Snake River dams, have been extensively modified and outfitted to reduce their impact.

In the Northwest, hydroelectric dams also destroyed or cut off access to important cultural sites for Native Americans. Many of these sites were waterfalls where Native people could fish the abundant runs of salmon. Today, hydroelectric operators recognize it is important to work with local tribes to restore culturally significant sites and fish populations.