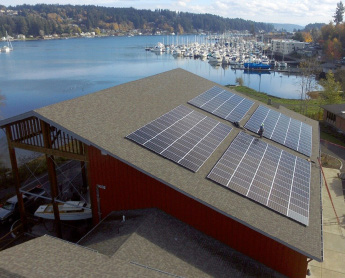 By definition, community solar is a sharing model for going solar. In a community solar project, a group of participants contributes money to build a solar array and share the financial benefits among themselves as well as with the location where the solar is sited.

In Washington, community solar makes solar more accessible to people who rent, who own a home but don’t have a sunny location, cannot afford the upfront cost of solar, or simply want solar at a lower entry price.

In 2015, PenLight partnered with Harbor History Museum and Bonneville Environmental Foundation to build a 60-kilowatt array called the Harbor Community Solar project. Built on the roof of the Harbor History Museum, it was energized November 6, 2015. Each year the array produces more than 60,000 kilowatt-hours of solar power. That’s about half the museum’s annual electric use. Since it began generating electricity, the Harbor Community Solar has generated more than 240,000 kWhs of renewable power.

More than 100 PenLight members participated in funding this system. They receive annual state incentives for every kWh of solar energy produced. Not only does the museum greatly benefit by using the renewable power generated from this system, but our participating members also benefit from the state’s annual incentives.

As part of an ongoing educational effort, a display inside the museum tracks the electric generation of the project. Check it out!

You can also find more information on our website, www.penlight.org/energy-services/solar/harbor-community-solar.