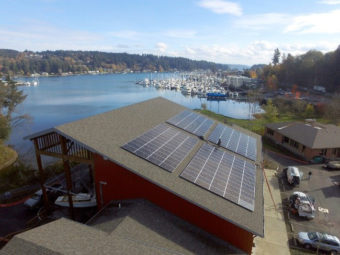 In 2005, a production incentive was established in the state of Washington as part of the Renewable Energy Cost Recovery Legacy program. It was for homeowners, businesses, and local governments that installed solar and wind generation. In 2009, the program was expanded to include Community Solar Projects where a group of participants contribute money to build a solar array and then share the financial benefits among themselves and with the location where the solar is sited.

During the past 15 years in the Legacy Program, 81 PenLight members have installed photovoltaic systems on their rooftops and generated renewable energy for their homes. On average, each member’s solar system generates enough renewable energy to offset about half of their annual consumption.

In November 2015, PenLight partnered with the Harbor History Museum and the Bonneville Environmental Foundation to build the Harbor Community Solar project—a 60-kilowatt solar array on the roof of the museum. More than 100 PenLight members participated in funding this Community Solar Project. They receive annual state incentives for every kilowatt-hour of solar energy produced.

The community solar project has produced almost 300,000 kilowatt-hours since its installation. Each year, almost half of the Harbor History Museum’s annual energy consumption is offset by the rooftop solar system photovoltaic (PV) system.

This year marks the end of state incentives for the Legacy Program and the Harbor Community Solar incentive program. Under current law, June is the final month for solar production incentives under this program.

We feel honored to have been a part of this program and are grateful to our members for supporting renewable energy projects within our community.